I’ve taken a break from exam marking to record this episode rather quickly. You’ll probably hear some noises in the background, including my wife making lunch. She’s making smoothies too. I’m a lucky guy.

[DOWNLOAD]
This episode is mainly about the recent earthquake in Nepal, but I’m also going to mention a couple of other news stories that are worth talking about, including the UK’s general election which is happening at the end of next week, and the fact that Kate Middleton has just given birth to a baby girl. It’s all over the internet and on TV now – but how important is it really, considering so many people’s lives are in jeopardy in Nepal at the moment?

The Earthquake in Nepal
As I hope you’re already aware, recently there was a very big earthquake in Nepal, near Katmandu, the capital. Thousands of people (I think about 5,000) are confirmed dead, and thousands more are missing. It’s a big disaster.

I’m going to describe the story a bit (in case you don’t already know the details), let you know of a way to help the rescue workers there, talk a bit about earthquakes, and also about Nepal and its relationship to the UK, focusing especially on the people known as the Ghurkas.

Sadly, tragic events happen around the world all the time. This includes large scale violence of any kind – terrorist, military or whatever you want to call it, but also disasters like the recent sinking of a boat full of emigrants from Libya, and now a huge earthquake in Nepal. I don’t mention every bad thing that happens in the news on my podcast. It’s not necessarily my job to highlight these things. It’s not normally the focus of my episodes of course, but today I felt moved to record something on this topic, because of the scale of the event, the opportunity to help in any way and because I received a message from a Nepalese listener to this podcast, who reached out to me, politely asking if I would mention it in an episode. Seeing the news reports about this natural disaster, and reading the message from a listener was enough to push me to say something about it on the podcast.

Please consider donating to the Disasters Emergency Committee
Sometimes I suggest that you donate to my podcast to help me keep doing it, but of course today I’d like to say please do not donate to me and instead consider donating to the Disasters Emergency Committee, who are helping to deliver relief to the areas which are badly affected by this earthquake. You can do that by visiting www.dec.org.uk. It’s easy to do it. 5,000 people are already dead, and this number could reach 10,000 according to some estimates. That means that this follow up period is vital. They need resources for the rescue work, the treatment of injured people and all the other vital aid that can be given there. The disaster is ongoing because of the damage to buildings, the aftershocks (other smaller earthquakes) and all the injuries and loss of food and shelter. It might seem like a small contribution from you, but even a little donation could make a big difference to people who have no resources or basic services. Of course, it’s completely up to you. But you could make a difference. www.dec.org.uk

Here’s the message I received today
Hi Luke,
What’s been going on?
I am Sagar Bhandari from Nepal and recently in Australia as a student. I am a regular lepster. I have been listening to your podcast for about a year but I have managed to get through every episode including the phrasal verb podcast as well. So I am proud to say the fact that I had the guts to write you, is due to you. Today the fact that I can write this much of english is all your contribution. To be honest you really egged me on.

We all know that Nepal is now suffering from a devastating earthquake which even took the life of more than 5000 people, and the death toll is rising all the time. On this very sad moment I feel guilty about not being in my country but also didn’t give up on listening to the jokes episodes. So I am not going to request you to raise a donation or fund regarding the disaster but I am hoping to listen a episode about disasters like earthquakes, which you can relate to the recent quake in Nepal. I am also known about UK is also with us, as David Cameron said he would help us. Also it would be fruitful if we listeners can listen to an episode about earthquakes, their history, impacts, and how to be aware of them.

Ok that was a trendy news but also i was thinking you to write about the GURKHAS who are serving your Nation from 200 years ago. You might know that Gurkhas are also the people from Himalayan regiom of Nepal. So the relation between Nepal and UK started from 200 years ago. I also would like to listen about the episode about the Gurkhas as it was a great topic in UK once about their residency.

So please if you could manage to do some research and brainstorming about those topics and could make an episode, we all listeners would love to listen it in authentic British English.
Thanks

What happened in the Nepalese earthquake?
Here are details from Nature.com – it’s a clear and concise summary www.nature.com/news/major-earthquake-hits-nepal-1.17413

In other news
The UK is having a general election. It’s a huge subject which I would absolutely love to cover in proper detail on Luke’s English Podcast, but I’m not sure I have the time! In a nutshell, it’s extremely close, and we’re probably going to have a coalition government – but between who and who? It’s quite clear that UK politics is moving away from the traditional two party system, into a more fragmented and pluralised system with lots of candidates from different parties representing the views of not just different political positions, but also the views of people from different regions.
The main issues are:
– Labour and Conservatives are very close, but neither will get a majority. That means they both might be in a position to form a coalition with another party, but with who?
– The SNP have loads of support in Scotland after the independence movement involved lots of the Scottish people in their politics. The SNP are in a position to have a big influence over UK politics now – either in coalition, or just with a significant presence in the house of commons. They’ll be able to influence laws.
– Some people in England are worried about the influence of so many Scottish MPs on English law.
– UKIP – the anti-immigration and anti-EU party might get more seats in commons, and there’s a chance they’ll form a coalition with Conservatives. How would this affect Conservative policy, especially on Europe?
– If David Cameron gets into power again, the UK will have a referendum on EU. If we vote to get out of the EU, that would be a massive change to the UK.
– I was interviewed on TV about this on Thursday – completely by surprise! I was invited on the show just 2 hours before it was broadcast live. That was fun!

The Royal Baby
– Kate just gave birth to a daughter. We don’t know the name yet. It’s a princess though.
– The TV is full of images of patriotic Brits and tourists outside Buckingham Palace.
– I’m always disappointed to see on French TV that they always interview the slightly crazy people who dress in union jack clothing and sit outside the hospital for days. They’re not normal English people! It just confirms a stereotype that we’re all eccentric passionate monarchists, which is only partly true.
– Ultimately, how important is this story? Perhaps it makes people feel better, but shouldn’t we focus attention on the more serious things going on?

On that note, please consider donating to the Disasters Emergency Committee

That’s it for this episode. Thanks again for your feedback. I recently added a feedback form on my website. I’ve asked my listeners questions. I value your feedback very much. I want to know what you like about LEP, and what changes you’d like me to make. I can’t guarantee to make all those changes, but it’s helpful for me to be able to keep LEP as relevant to you as possible, while also ultimately, being the one who decides exactly what goes into these episodes. You can find the form in the CONTACT section of the main menu of teacherluke.co.uk.

That’s it. Watch out for more episodes in the near future! 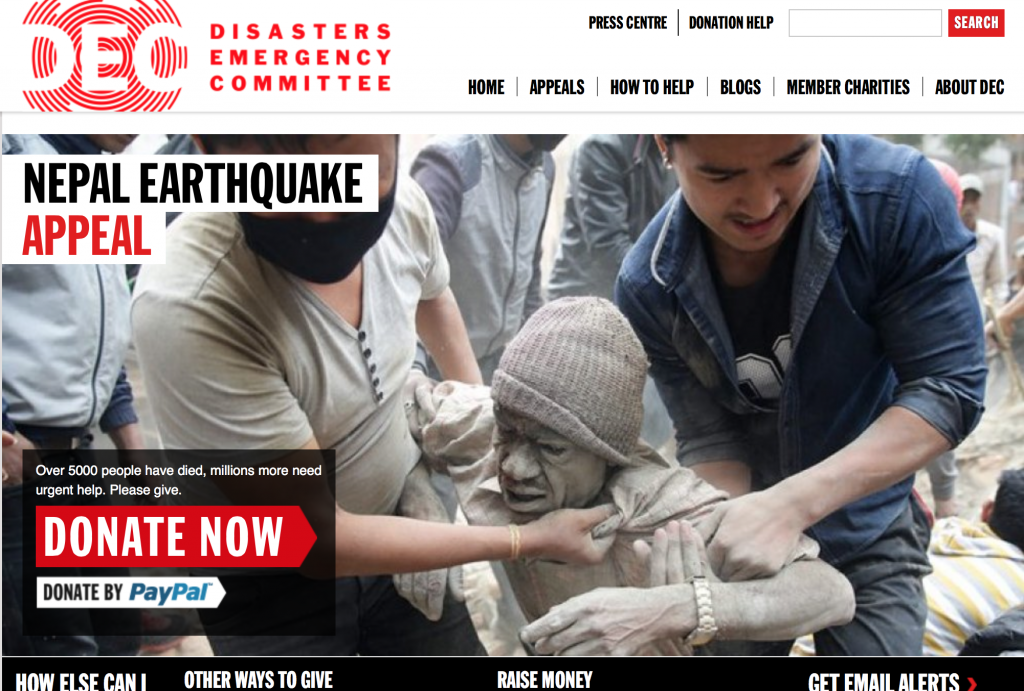