Are you living in a foreign country, or planning to live abroad for a while? This episode will be vital listening for you! Listen for some key bits of wisdom to avoid being affected by cultural differences. In this episode I talk about 4 common phases of culture shock that anyone could experience when living in a new environment, and how to make sure you get the best out of a cross-cultural experience. Right-click here to download this episode.

What is culture shock?
It’s the disorientation that a person feels when they move to or visit a new place. It’s how you feel when you are dealing with a change of environment and an unfamiliar lifestyle. It’s usually associated with adjusting to life in a foreign country but t could also happen if you join a new company, or just move to a different local area.

The Four Phases of Culture Shock
It is generally held that culture shock affects people in a variety of ways, and that there are different stages of adaptation to a new environment. Let’s look at the four stages that are often talked about.

1. The Honeymoon phase
Differences are seen in a romantic light.
You tend to see everything through ‘rose tinted glasses’.
It’s fun to identify differences between your culture and the new culture.
It can be possible to make friends based on the shared joy of experiencing someone from another culture.
It’s probably the experience most of us have as tourists in the new place. In fact, as tourists we manage to avoid or overlook the challenges of existing in a new culture, as it’s all part of the fun of a holiday experience.

*I think there’s another phase which may occur at the beginning – and that’s the FEAR phase! This is what happens when the new culture is overwhelmingly different, causing you to feel shell shocked. You might be too scared to do anything, because of the risk of getting out of your depth, or getting lost or hurt or something. This can cause you to stay inside a lot and just hide from the world! This is how I felt when I first moved to Japan. I was very concerned about getting the wrong bus, or making a big mistake because I didn’t know what I was doing. It was quite stressful, but I was also having an amazing adventure (part of the honeymoon period).

2. The Negotiation Phase
Here the differences between you and the host culture become obvious and problematic. This could result in frustration, anger, loneliness and homesickness. Unfavourable things make you feel like the host culture is strange and offensive. This is usually brought on by a bad experience that brings you back down to earth, such as a break up. At this point the culture can seem weird, different, stupid, or confusing. It might make you think, “how can these people live like this?”
This might also involve environmental things, like your body dealing with weather changes, light cycles or levels of bacteria. It might result in you feeling tired, irritable or sick. Language and body language can play a large part in this too. It’s important to avoid jumping to false conclusions about your host culture because your limited ability to understand them can cause you to assume certain things about them. E.g. you might assume that people don’t have a sense of humour – but it’s just that you aren’t noticing their jokes.

3. The Adjustment Phase
This is when you manage to develop an effective working routine in the new place. You develop your own problem solving skills and strategies for getting by in the new country. The issues that confused you before are now more understandable as you’ve developed a finer appreciation of the way of life in this new place. You understand the people more deeply, and this allows you to enjoy and appreciate their culture more. You might suddenly realise, “Wow, these people are really clever! Their way of life totally makes sense now!”.

4. The Mastery Stage
This is when you are able to operate in the culture without any problems at all. In fact, you’ve become completely naturalised while also maintaining your original culture too. What happens is that you become bi-cultural – the sort of cosmopolitain person who is able to adapt to different cultural contexts. You might have developed a ‘best of both worlds’ approach to your lifestyle, in which you incorporate the most effective aspects of your culture and the other culture. You’re open minded enough to realise that no culture is perfect, and that you can lose aspects of your own culture and replace them with more beneficial aspects of the other culture.

The Outcomes of Culture Shock
There are a few possible ways to react to living in a new culture. You can become one of three people (although I expect it is probably more nuanced and subtle than just 3 possibilities).

So, when faced with culture shock experiences people can become:
1. Rejectors
These people are unable to adapt to the new culture, and instead become isolated. They can’t integrate, they live in their own communities, they have lots of bad experiences with the locals and they find that the local culture is hostile. They might not even realise that they’re experiencing culture shock and just jump to lots of negative conclusions about the host culture, which then prevents them from really enjoying and adjusting to life. This may also be due to prejudice on either side, for example racism on the part of the host culture towards those who have moved there. It’s often due to a lack of awareness of culture shock and the causes of it. Ironically, these people have an even harder time re-entering their own culture, because they’re not aware of how much they’ve changed.

2. Adopters
These people integrate fully and lose their original identity. They will probably live in the country forever. Ironically, they might become “more English than the English” (if they’ve moved to England, for example), becoming excessively proud and defensive of what they perceive to be true values of the host culture, in an attempt to fully integrate.

3. Masters
These are the cosmopolitain types who adapt and learn to be flexible, moving between cultures, creating a unique blend of “the best of both worlds”. They remain open minded and have a tolerant and flexible approach to change. They might become nomadic, as moving to new places becomes the norm.

That’s it for this episode. Thanks very much for listening! Please share your culture shock experiences. Have you ever experienced culture shock? Where were you, and what happened? Please leave your comments below. 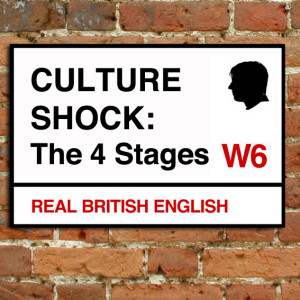