‘Peeling back the onion’ on management speak and corporate jargon.
This episode focuses on defining and explaining the examples of language you heard at the beginning of the last episode. You’ll hear Paul and me going through all the phrases and by the end you should be able to understand it all, and you could create your own version of bullsh*t bingo! See below for definitions and to print some bulls*t bingo cards.

[DOWNLOAD]
The intro to part 1 – This contains all the language we define in this episode
Hi Paul, thanks for taking time out to talk to me today.
I just wanted to touch base with you in order to get all our ducks in a row, OK, so let’s peel back the onion and have a good look under the bonnet on this podcast situation here. At the end of the day, we’ve brought you on board here because we think you bring a lot to the table and I think that impacts favourably on our key market component players, and I think this is something we can leverage to bring about greater penetration, ultimately pushing our growth potential above and beyond just the low hanging fruit and into the stratosphere on this one. I’m talking streamlining, I’m talking synergy and with yourself on board we can push the strategic staircase all the way up to eleven. I’m talking 110% mate.  After all, that’s part of our DNA here at LEP solutions isn’t it. We’re all about cascading relevant information and branching out across new frontiers and web 2.0 platforms and that’s why I thought I’d reach out to you, offline like this, just so we can have a bit of downtime to go over this, get a helicopter view to make sure nobody drops the ball going forward. I think you know what I’m talking about. Feedback says restructuring has been working very well, I mean, clearly this is not a come to Jesus moment, far from it and in fact I think there’s no need for much more of a drill down on this one or it’ll just turn into a case of paralysis by analysis, so let’s keep our eyes on the prize ok Paul?  Wait, don’t say anything. I know what you’re thinking, you’re thinking, “but Luke, how can we truly push the envelope and come up with genuinely competitive deliverables across multiple platforms to upscale our market diversity moving forward” and that’s what I like about you Paul. You don’t beat around the bush, you just say it like it is. So, just to finish up here, I’d say –  don’t let the grass grow too long on this one, okay, what I’m looking for is for you to have a get together with your team, unpack these issues, have an idea shower, really think outside the box – blue sky thinking,  and then by end of play, shoot me over an exit strategy that will allow for true organic growth maximising our potential for upstream stratcom. So, if you could action that, then we’ll just run it up the flagpole, you know, put the record on and see who dances, and then ideally we can look to open the kimono and truly take it to the next level going forward, firing on all cylinders. OK?

List of Jargon & Definitions (Explained in this episode)
Action = as a verb, to mean “do”. “Can you action that?” (Redundant – why say this when you just mean ‘do’? Sounds self important)
At the end of the day = ultimately (why are things different at the end of the day? And anyway, it’s no the end of the day, it’s 11AM) (Cliche)
Bring to the table = What table? This means to offer skills, services, ideas etc. “What are you bringing to the table?” = what are you bringing to the team in terms of skills, knowledge etc.
Cascading relevant information – speaking to your colleagues. If anything, this is worse than touching base offline. From the flourish of cascading through to relevant, and onto information – this is complete nonsense. It sounds way more self-important than necessary.
a Come-to-Jesus moment (A meeting in which one person has to be disciplined and brought back in line with the philosophy or ethos of the organisation, a meeting or situation in which a person/organisation comes back to core values, often admitting mistakes in the process) Sounds really pretentious.
a Deliverable (a thing that has to be provided) – “the company’s primary method of measuring customer feedback on deliverables” Why not just products, services or information? It sounds annoying because it’s a noun which used to be an adjective. I think it’s not that bad.
Don’t let the grass grow too long on this one = work fast. I’m looking for a polite way of suggesting that you get off your backside and get on with it. What grass anyway? This is just an annoying use of metaphor, obscuring the fact that you’re telling me to hurry up.
Drill down = go into details, investigate the details. Seems unnecessarily aggressive and even overtly sexual?
Drop the Ball = rugby based expression, meaning fail or make a mistake.
End of play = This means by the end of the day, or by the end of the week. I guess it’s used to make it sound like sport or a game, but sorry – it’s work.
Exit strategy = a planned way of exiting a situation (e.g. investors need an exit strategy)
Get all your ducks in a row – be organised and in line with everyone else. You may think I’m disorganised, but there’s no need to talk to me like a five-year-old.
Going forward / Moving forward = in the future
Helicopter view – need a phrase that means broad overview of the business? Then why not say “a broad view of the business” or “an overview”?
Idea shower – brainstorm
Impact – instead of ‘effect’ as a noun. What will be the impact on our sales? How will this impact our sales?
Issues (not problems)
Leverage – used as verb to mean magnify, multiply, augment, or increase.
Look under the bonnet – analyse a situation. Most people wouldn’t have a clue about a car engine. When I look under a car bonnet I scratch my head, try not to look like I haven’t got a clue, jiggle a few pipes and kick the tyres before handing the job over to a qualified professional.
Low hanging fruit – easy win business
Open the kimono = to be open and transparent, usually with external people
Organic growth = naturally occurring development
Outside the box = usually, “think outside the box” – this just means thinking without any restrictions, like ‘blue sky thinking’. But I didn’t realise we were in a box.
Paradigm shift – just a big change in the way we do things.
Paralysis by Analysis = thinking about things too much and not actually doing anything
Part of our DNA = an intrinsic part of our nature, usually the DNA of a company. But companies don’t have DNA.
Peel back the onion = analyse the situation in detail, going through numerous layers.
Penetration = e.g. market penetration. This means going into something deeply. Again, it’s a bit sexual isn’t it.
Push the envelope = make things better, challenge current standards, go further.
Put a record on and see who dances – as above. Unfortunately the kind of person who says this is likely to put on Gangnam Style because they think that’s cool too. Think David Brent to the power 10.
Reach out – as in “I’ll reach out to sales to get the latest figures”.
Restructuring = usually this means firing people or making redundancies, or at least changing the structure of the company and moving people
Run it up the flagpole – Try it and see what happens, or ask for the opinions of everyone, or show it to everyone to get their feedback.
Square the circle – not entirely sure what this means! I think it means to standardise it, get it under control , solve a difficult problem. It comes from geometry – making a square with the same surface area as the circle. It’s difficult, basically.
Strategic Communication (also known as “Stratcom“) = communicating with customers in a planned way. “stratcom” just doesn’t sound like English.
The strategic staircase = a business plan. Thanks, but I’ll take the lift.
to Streamline something / streamlining = like restructuring. A nice way of saying “getting rid of people we don’t need”
Synergy = cooperation of different parts of a business. Different departments working together well.
Touch Base = to talk to someone
Touch base offline – meaning let’s meet and talk, in a more informal setting. Because, contrary to popular belief, it is possible to communicate without a Wi-Fi signal. No, really, it is. Fancy a coffee?
Unpack (as in “Let me unpack that statement.”) = explain and go into details

Bullsh*t Bingo
Use these cards to play your own version of bullsh*t bingo.
You can use the intro to episode 306 (in which I use a lot of management speak).
Play with 4 players.
Hand out the cards.
Listen to the intro to episode 306.
When you hear a phrase, cross it out.
The first person to cross out 3 phrases in a line shouts “BINGO” (or if you prefer: “BULLSH*T!”) 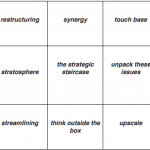 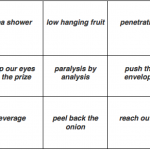 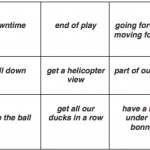 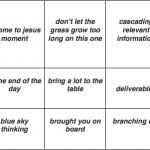 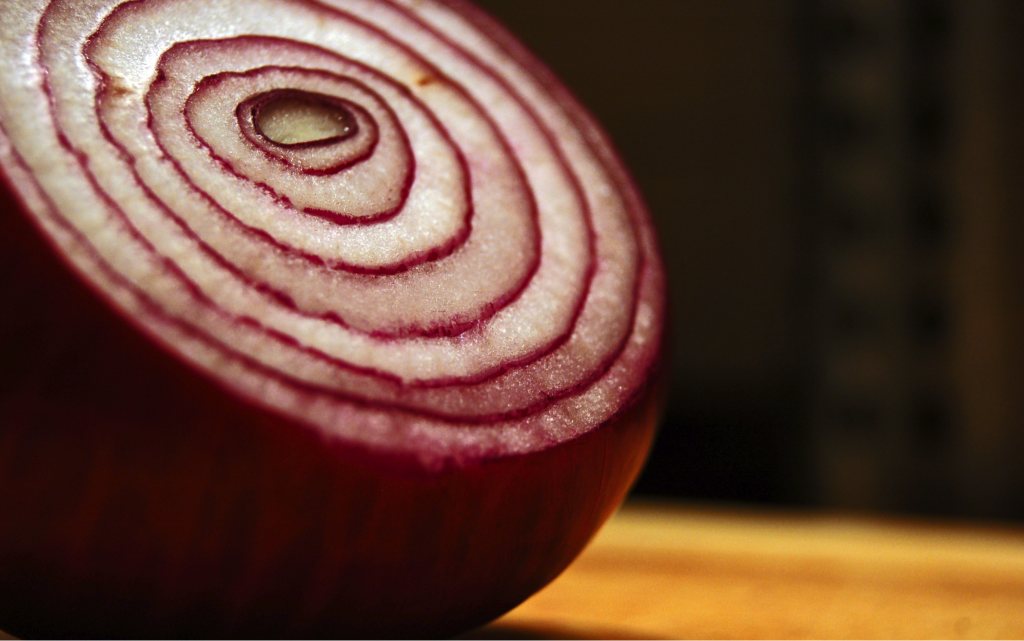