Everything you need to know about the culture of tea-drinking in the UK, including a full guide to how to make a nice cup of tea, English style.

[DOWNLOAD]
In episode 420 I have chosen to talk about my favourite herb, which like millions of other British people, and countless others around the world, I consume on a daily basis. It calms my nerves, it raises my morale, and it helps me to socialise. Queen Victoria famously used it, and the Beatles took it regularly during the recording of their most inspired music and even sang about it in a few of their songs. I’m talking of course, about tea.

As everyone knows, tea is very popular with people all over the UK, from all regions, backgrounds and social classes, whether you’re the Queen herself, or you’re the guy who cleans the road outside her massive house, everyone loves a brew. The British Empire was built on tea, wasn’t it? Goodness knows I’ve made enough references to it in my episodes – I’m even drinking a cup right now. Mmm.

Why an episode all about tea?

I just want to celebrate tea, but also I want to tell you everything I think you need to know about this subject including these things:
– Stereotypes about tea drinking in the UK
– Different ways to make and drink tea – Afternoon tea vs just having a cuppa
– My personal way to make a nice cup of tea
– The history of tea in the UK
– Facts about tea, including its health benefits
– George Orwell’s essay on tea – considered a kind of reliable guide to the ins and outs of the potentially controversial subject of how to make tea.
– References to tea in Beatle music

What are the stereotypes about drinking tea in the UK? Are they true?

Smashing a few stereotypes – let’s talk about how most people drink tea in the UK these days, not how people seem to think we do it (that’s quite hard because it depends who you are).

*Tea is for the upper classes and is a posh affair full of uptight rules – nope, all types of people drink tea and it’s often a very casual and informal moment.
*Drinking tea is a mystical, spiritual kind of experience that takes you on a journey into a colonial dreamland where you have a profound moment of higher understanding while visiting the distant lands full of oriental mystery – nope, we’re not that pretentious about it! It’s just a nice hot drink!

Here’s that annoying advert for Special T with Diane Kruger

*Tea is only drunk at tea time – nope, people drink it at all hours of the day
*All British people like tea –  not everyone likes it, of course
*Tea contains more caffeine than coffee – see below

What’s your specific method for making a good cup of tea, Luke?

I’ll tell you about 3 typical situations in which make tea, and the different ways I do it.

What are your preferred tea brands?

PG Tips (pyramid bags), Yorkshire Tea (“like tea used to be”), M&S Gold, or fancy brands that you find in Wholefoods or little cafes – never Lipton and not Twinnings either.

Why do people drink tea so much in the UK? What’s the history of Britain and tea?

It’s all to do with our colonial past and the East India Trading Company! If you want to know more, just Wikipedia it! en.wikipedia.org/wiki/Tea_in_the_United_Kingdom

What do people eat with tea?

Click here to see pictures of popular biscuits in the UK.

Click here for typical cakes which we eat with tea. YUM YUM YUM

What are the health benefits of tea?

There are  loads of benefits, apparently. Have a look: The Evening Standard – “5 Reasons Why Drinking Breakfast Tea is Scientifically Good For You”

George Orwell’s well-known essay about how to make a good cup of tea, first published in the Evening Standard in 1946. It’s hard to argue with his approach and the clear and lucid way it is described. www.booksatoz.com/witsend/tea/orwell.htm

References to tea in songs by The Beatles

“Without doubt tea was the Beatles’ top tipple of choice! In one 3-month period in 1967 when they were ostensibly at the height of their drug period – they actually recorded no less than five songs referring to this most English of habits! (“Lovely Rita,” “Good Morning, Good Morning,” “A Day In The Life,” “All Together Now” and “It’s All Too Much.”) They actually recorded more overt references to tea than to drugs!” [Martin Lewis, Beatles scholar and humourist]

Talking with Richard McNeff about making a perfect cup of tea – recorded 6 years ago before I had a tea-pot!

Do you prefer tea or coffee? How do you like to make it? 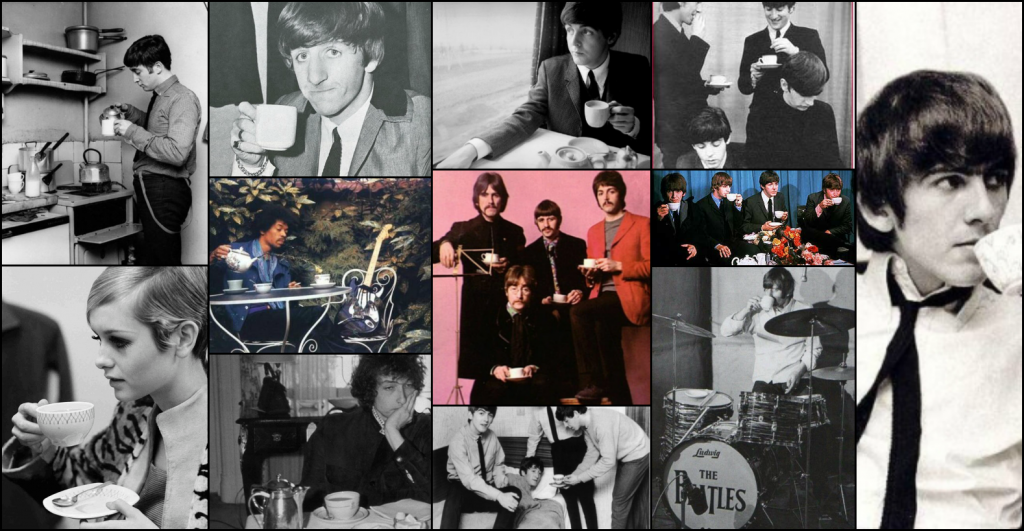