In the last episode I attempted to explain ways that prepositions are used in English, and I failed because I wasn’t prepared. I managed to get across the idea that prepositions are complicated because they’re used in combination with other words, and that you have to remember vocabulary in ‘chunks’ but the idea was also to present you with some useful lists of preposition collocations. This time around I’ve done some more preparation. I’ve spent a bit more time on it and so for round 2 I think we should get a proper grip on the subject, while also having some fun noticing prepositions in an improvised story. [Download]

We all know that prepositions are one of the most difficult aspects of English grammar and vocabulary. That’s also why they’re hard to teach. They don’t conform to easy-to-teach rules, like other aspects of grammar. Instead, it’s about patterns and collocations. So, often the best way to learn these collocations is to see them as chunks of vocabulary, and try to notice them as they are used naturally. In this episode the idea is to give you a chance to do that by listening to a made-up story which includes loads of verb + preposition collocations.

Some Facts
Let me break it down in a simple way. Here are some “facts” about prepositions.
1. A preposition is always followed by a noun or something like a noun (e.g. a gerund or a noun phrase).
2. We use prepositions to talk about time, position and movement – and these are the easy ones. For example, “The cat is on the chair, the mouse is under the table, the monkey is on the branch. I’ll see you on Sunday at 3 o’clock. The train went into the station. The monkey fell out of the tree. The cat jumped off the chair.” etc etc. These are ‘easy’ because the prepositions seem to have specific meanings of their own, and they don’t change depending on which noun or verb you’re using.
3. The more difficult part is the way we use prepositions to attach nouns to other parts of the sentence. Prepositions tend to collocate with different adjectives, verbs and nouns. For example we say “He’s been accused of murder” and “I’m accustomed to the smell from the restaurant downstairs” and “This flat has really good access to the underground station”. What does collocate mean? It means that these words ‘just go together’. They’re friends. They always hang out with each other. Why? That’s the difficult thing to explain. I’d say – don’t focus on the individual meanings of prepositions. Instead focus on the way they just collocate with other words, and then learn those words together. So, don’t just learn the word “accuse” but learn the phrase “to accuse someone of something”. Don’t just learn the word “doubtful” but learn the phrase “doubtful about”, don’t just learn the word “comply” but learn the phrase “to comply with” and also the noun “compliance” and “to be in compliance with”.
4. Prepositions can be hard to hear because of the way they’re pronounced. They’re not usually the ‘meaning words’ in sentences, and so they can be pronounced using ‘weak forms’ of pronunciation (schwa sounds). Pay attention to the way prepositions are pronounced by native speakers in fluent speech.

There are 4 key points about prepositions, and also reasons why they’re tricky for learners of English.

Really, I am sorry. This makes life much more difficult for you, but you must get used to it right here and now. Accept that you’re now learning phrases, and once you’ve accepted that, every step you’ll take from now on will be in the right direction.

So, it’s these preposition collocations which are the tricky things. Learners of English struggle to know which preposition to use in the right moments. Sometimes these are influenced by the first language. For example, many French people say “It depends of…” e.g. “It depends of the cost” and of course it should be “it depends on the cost”. Watch out for the L1 influence.

What can you do?
– When you’re learning words – don’t learn them in isolation. See how they connect with other words in a sentence. Remember the prepositions that go with them. This will actually help you to become more fluent as prepositions are good transition words. They help you turn individual words into phrases, and those phrases into full sentences.
– Notice when you listen. Just pay attention to the preposition collocations you hear.
– Listen a lot and read a lot. Eventually, a lot of the most common preposition collocations will just go into your subconscious after being exposed to them so many times. After a while you’ll develop an instinct for the right collocation.
– Check out some lists to help you. You could test yourself by looking at some collocation lists (e.g. on this page). Cover the preposition and then try to remember it. Say it out loud. Check your answer. Say the phrase (it’s important that it passes through your mouth, and across your lips). Make full sentences, in different tenses in order to practise.
– Listen to Luke’s English Podcast (of course!)

Let me explain my approach for this episode of the podcast.
In this episode I’m planning to do this:
– I’ve prepared fairly long lists of common collocations with prepositions. Verb + prep, adjective + prep and noun + prep lists. You can check them out on the webpage if you like. Those lists are really useful in themselves. So this is already a really useful resource.
– I’m not just going to read out the lists. That would be boring and not that useful.
– I’m going to try and just make up some kind of story – completely improvise it – and use as many of the preposition collocations as I can. Try to notice them. You could go through the list and kind of ‘tick’ them off as you hear them, or try to notice them without the list.
– Bear in mind that the story is completely made up. The main thing is I want to keep it fun and interesting, while also presenting some language to you.
– There are 3 lists. They’re all quite long. I don’t know how much I can achieve in one episode. I might end up dividing this into three stories. One for verb + prep collocations, one for adj + prep and one for noun + prep. We’ll see.
– When I’ve finished I’ll go through the lists, and I’ll give you a chance to test yourselves.
– Then you can revise by testing yourselves using the lists, you can write your own stories using the prepositions and vocabulary, or you could record yourself reading or improvising a story. Don’t worry if you can’t improvise. That’s a different thing altogether. You should try to produce meaningful sentences using these phrases though. It’ll help you to remember them. Try to make your sentences personalised and very vivid – that’ll help you remember them all.
– You’ll also be picking up vocabulary here from the verbs, adjectives and nouns that collocate with all these prepositions. Just google them or look them up in a dictionary if you don’t know what they mean. I’m not explaining word meanings here, just presenting language. 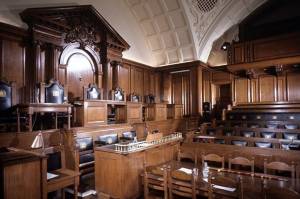 *Start by opening your eyes – you’re standing in a courtroom. You ask the lawyer what’s going on. You’ve been accused of stealing a biscuit. You’ve got no idea what happened. Then the judge comes in…* 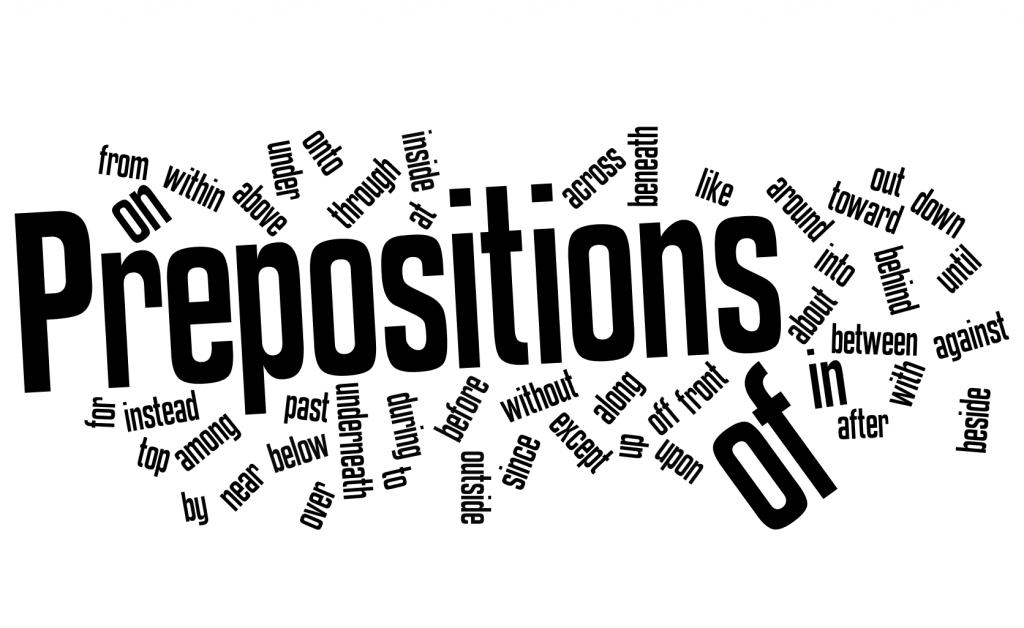