My response to the film Taken 3, plus 12 expressions with the word ‘take’. [Download]

The Film
*Spoiler alert* – I might give away some details of the story line, although I think you probably have a good idea what kind of thing you can expect. Someone did something to his family, and Liam Neeson will use his very particular set of skills to find them, he will hunt them down and he will kill them. There will be loads of high-octane action, some very questionable moral actions, and the usual offensive stereotypes of foreign people.

You should know that I’ve talked, at length, about Taken 1 already on this podcast.

Yesterday I went to the cinema and tweeted “I’m on my way to see Taken 3…” Naturally, some people wanted me to talk about it on the podcast, so here it is.

In a nutshell, this film is bad – it’s total pants, it’s piss poor, it’s lame, it’s cheesy, and frankly, it’s dull. It’s like a b-movie, but with Liam Neeson. It retains few of the redeeming qualities of the original, brings nothing new to the table and just looks like everyone involved is just doing it for the money. That’s not to say it was without enjoyment – I did enjoy it a bit, perhaps because I’d lowered my expectations before going into the cinema.

Expressions with Take
There are loads. Here are 12. Listen to the episode to hear full explanations and examples.

1. Take someone for a ride = to rip someone off
2. Take someone to the cleaners = to rip someone off, or to beat someone
3. Take something for granted = to undervalue something which is actually very valuable to you
4. Take it on the chin = to be strong and resilient in the face of criticism or adversity
5. Take it out on someone = to express your anger/frustration by being nasty or aggressive towards someone else
6. Take advantage of something = to make the most of it, to exploit it
7. Take it easy = relax
8. Overtake = to move in front of someone (e.g. in a car)
9. Take over = to take control of something (to acquire)
10. Takes one to know one = In order to know something you have to be that thing too
11. To have what it takes = to have the necessary qualities to do something
12. Give or take = approximately 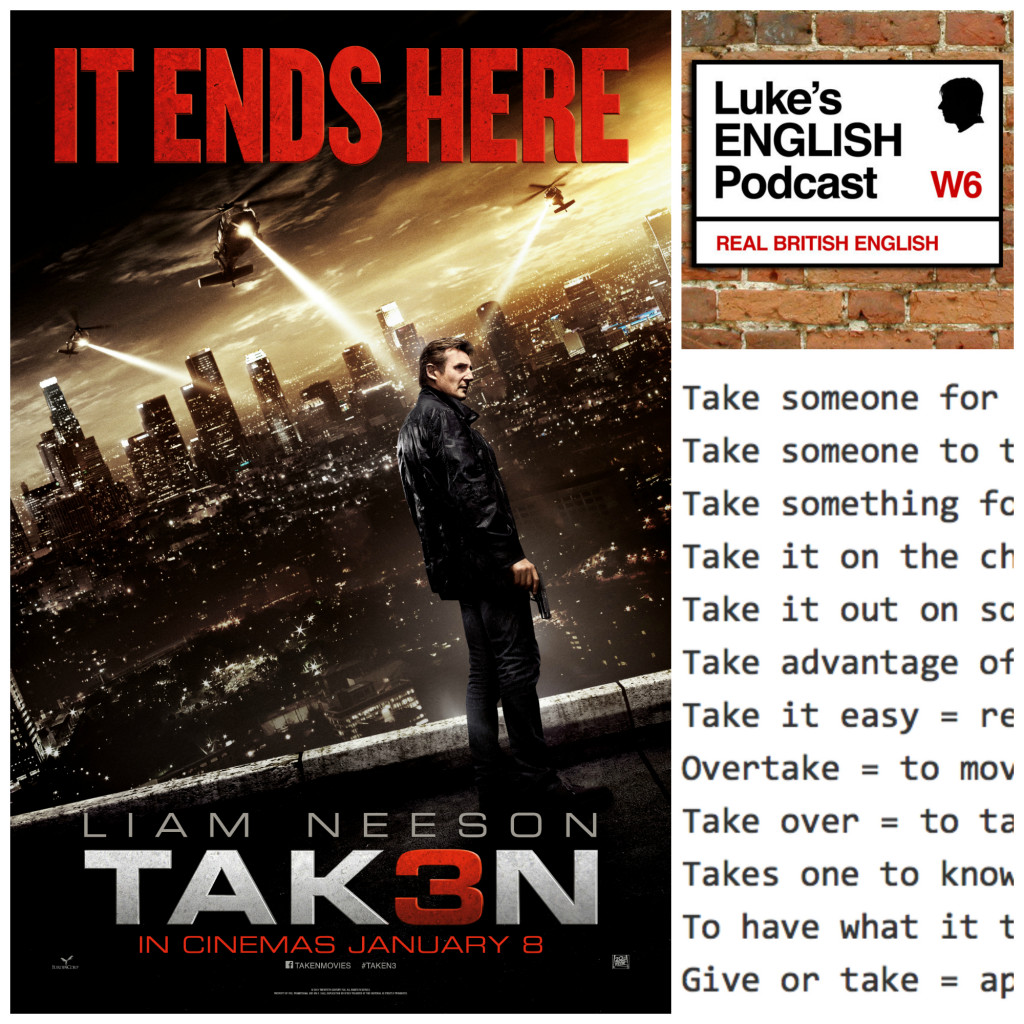