This episode is the first part of a conversation I had recently with a friend from Northern Ireland. It’s the first time I’ve had someone from that part of the UK before so it’s a chance to get to know him, his country and the accents you find there. In this one we get to know Marcus and give you a chance to hear his accent. There will be two more parts to this episode. Enjoy!

[DOWNLOAD] [AUDIOBOOK OFFER] [PART 2] [PART 3]
Just before we start I would just like to say thank you for taking part in the quick survey that I launched on teacherluke.co.uk recently. I asked you to select the types of episode of the podcast that you prefer to listen to. You can still do it of course, by going to my website and finding the page for the survey in the archive of episodes. Just click ARCHIVE in the menu and then ARCHIVE – ALL EPISODES and you’ll find the survey between episodes 276 and 277. The feedback will help me to know what kind of thing you prefer in episodes of LEP. Of course, ultimately I have the final decision because I’m the boss – I’m Luke after all, and this is Luke’s English Podcast and I have the final say, like sometimes I think it’s worth presenting you with something more challenging here, more entertaining there, more topic focused here, more pronunciation focused there and so on. But anyway, take my survey and let me know what your preferences are – your thoughts will combine with mine and it can help me to provide the right content for you. Click here to take the survey.

Quick Quiz
Now, quick quiz – what are the four countries that make up the UK?
England, Scotland, Wales and… Northern Ireland.
How much do you know about Northern Ireland?
What’s the capital city? (Belfast)
Another big city there? (some call it Derry, others call it Londonderry)
Where exactly is it? (well, the clue is in the name because it’s the northern part of the island of Ireland – but it’s not part of The Republic of Ireland politically, it’s part of the UK) It’s not far from parts of Northern England and South Western Scotland.
What else? The Titanic was built there, Game of Thrones is filmed there, unfortunately it’s also known for ‘the troubles’ – violence, civil unrest and terrorism.

It’s home to about 1.8 million members of the UK, and they have their own culture, their own accents and their own particular dialect, and in a recent survey the ‘Northern Irish accent’ was voted the sexiest accent in the UK!

Today on the podcast I’m joined by Marcus Keeley, who is a stand-up comedian, improviser and poet who comes from Belfast in Northern Ireland. I know Marcus from the stand-up comedy scene in Paris, as he likes to come here from time to time to visit and do comedy shows with our team. He’s a friendy, interesting and funny gentleman and this is the first time I’ve had someone from Northern Ireland on this podcast.

So, this is one of those episodes in which I have a guest on the show and we explore a number of different things within the context of an authentic conversation between two native speakers of English. If you like you can imagine that you’re there with us, involved in our conversation. After all, we are speaking to you, and for the attention of you, and you can get involved by sharing your comments on the page for this episode.

What are you going to get in this episode?
– Generally, this conversation is presented for people who are either learning English or who have a particular interest in all things British, or perhaps both.
– First we’ll get to know Marcus a little bit, giving you a chance to train your ear to his accent and way of speaking
– We’ll talk about Northern Ireland, and really get to know this often overlooked part of the UK – including a bit of culture, history, politics, things you can do as a visitor and whatever else comes up in our chat
– You’re going to listen to the Belfast accent of Marcus, and talk a little bit about the variety of accents that you can hear in Northern Ireland
– You can learn a few common phrases from the dialect of English that you hear in Northern Ireland

As ever, you can read notes for this episode at teacherluke.co.uk, so if you want to do some studying, you can.
Also, you may hear bits of rude language in this episode – so, you have been warned.
We covered a lot of ground in this conversation, which lasted nearly two hours so this will be a two part episode I expect.
Please leave any comments or questions on the page for this episode.
That’s it – I hope you enjoy our conversation, and that you experience something you haven’t experienced before.
It might be tricky to follow everything Marcus says in this episode because you’re not familiar with his accent. I encourage you to keep going and just try to follow the general flow of the conversation! Best of luck. Let’s get started…

1. Get to know Markus a bit
Where are you from exactly?
What brings you to Paris?
What do you do?
How long have you been doing comedy?
How would you describe your act?
Stephen Nolan Podcast 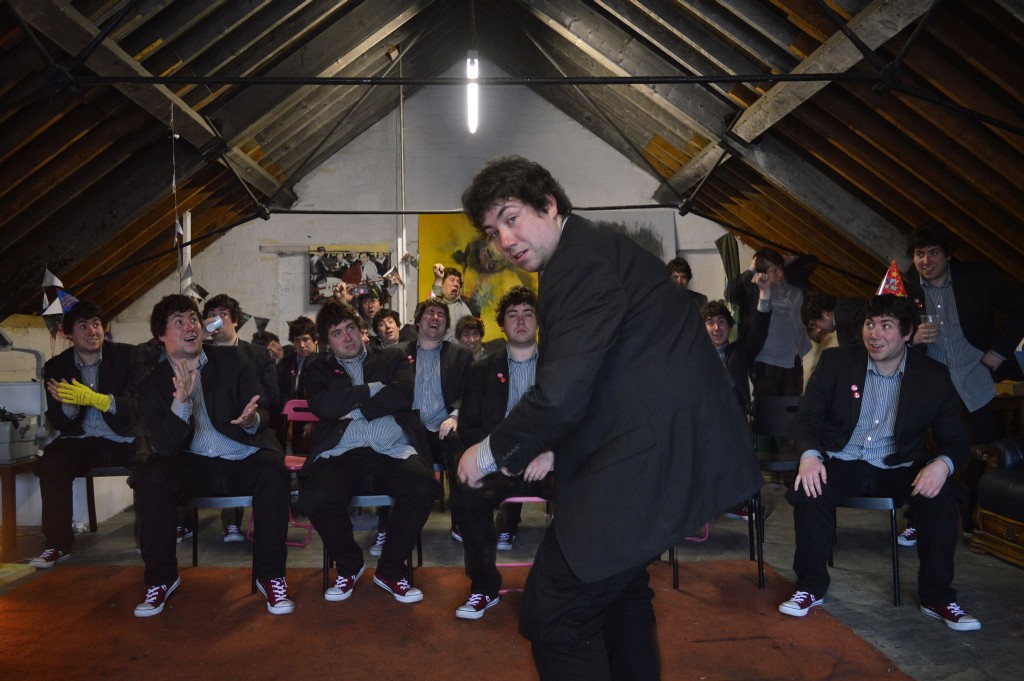